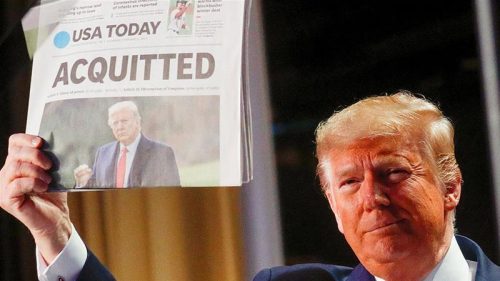 First off, I’d like to apologize for how long this has taken to post. I have been very busy these last few months and that will continue as the year progresses. Though I haven’t been actively posting, I’ve had a lot of time to process my prediction from last fall that Trump would be assassinated. It may seem like a prediction fail, since he obviously wasn’t killed. However, as I have concluded upon further review, impeachment stood in the way of his assassination at that particular moment in time.

Michael McCllean, a friend of the site, hinted at this possibility when he talked about Trump’s inevitable assassination (which I will expand upon). He was correct to say, in hindsight, that the impeachment proceedings, particularly from where they originated (the intelligence agencies) became a warning sign that Trump won’t live for much longer. This validates one of my prescient insights that the intelligence agencies are Trump’s biggest enemy and they are actively orchestrating to remove Trump. All of the investigations against Trump, from the Mueller report to the Ukraine impeachment, have stemmed from the deep state, which I correctly pointed out in past blogs. They want to remove him because he believes he is more powerful than they are. Their attempts to remove him are a way of reasserting their authority and showing the nation who really runs the country.

Perhaps sensing what was coming down the pipeline, Democrats tried to appease these violent forces by offering up impeachment as a way of stalling these deep state forces from taking hi out on their own. What this impeachment became was a compromise proposal; the last step of attempting to remove Trump non violently before he was removed by force. Pelosi and Schumer, not wanting to forment chaos as a result of an assassination that the intelligence agencies would orchestrate, tried to placate these forces first with the Mueller investigation and then the impeachment proceedings. With Trump’s recent acquittal and Bernie Sanders’ likely nomination (which the deep state opposes as well), they have run out of patience and won’t wait much longer before they act on their own to get him out of office.

As I mentioned in other blogs, the deep state would send out warning shots before they actually killed Trump. This happened days before the acquittal outside of his Mar-A-Lago estate. Another warning came days afterwards at the White House. If Trump’s assassination occurs later in the year, then the fall of last year becomes the period where it became inevitable that his assassination would occur and that the impeachment was the only thing that stood in the way of his being killed at that time. Because of these turn of events, I’m still going to say that my prescience was on point in many areas, even if my dating of events has been off. Certain events may still occur, so if they have only been delayed, rather than thwarted all together, then I’m going to call this a prediction fulfilled. For now, though, keep an eye on his rallies and the security situation (or lack thereof). Reports of compromised safety will give you an indication as to when Trump will be assassinated and whether the country as we know it survives this “intervention” by the deep state.

5 thoughts on “How the Impeachment Proccedings Stalled, but Not Averted, Trump’s Assassination”