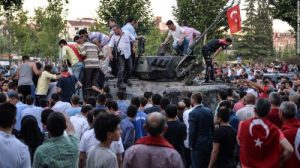 This is something I’ve written about before, but it needs a bit of an update due to changes that have happened since late last year. As I’ve previously mentioned, the only true way for Americans to gain freedom from oppression is to overthrow the government of the United States. Unfortunately, the timeline for such an event to occur has passed. The ideal moment for such a regime change was between the politically unstable times between 2014 and 2016 when the public nearly got down to it and would have succeeded if they pulled it off. Unfortunately, until the 2030’s, the window of opportunity for such a people led coup has closed.

When such attempts are taken up again in the near future (and they will at this rate), they will be instigated by the powerful and controlled to a point of repression by the powers that be. As one of our readers recently pointed out, Trump’s instigation of the media is not some sort of accidental blunder or sign of mental illness. This is done on purpose to spur violence that he can use to further entrench his power. When such attempts happen again in the near future, the police state will work to crackdown on the actions with casualties as a result.

While the end result won’t be pretty, that doesn’t mean there won’t be changes as a result of the revolt attempt. The violence will get out of control from the initial spurring by the elite and the usurpers make significant dents in the armor of the powers that be. In fear of too much of the armor getting cracked, the elites back down on their plans for worldwide austerity and some reform emerges when a new Democratic president comes to power in 2020. However, the fight that ultimately underlies the uprising is put off until another day and these issues will continue to linger until a proper resolution comes along decades from now.

While I wished it could be successful, the time for such a coup is too late. You all had your chance and now it is gone. Such efforts in the next year or so will ultimately fail, but not without bearing some fruit first. While it may prove to be worthwhile in the end, the losses sustained may be too much to offset the gains that come about as a result. Just something to keep in mind as street actions occur again in the near future.

As the temperature rises up, here are some predictions to cool your mind.

1) Corn will become a hot commodity as a shortage impacts the produce this season. Prices will rise greatly as a result.

2) The state of Iowa will have a very devastating summer in regards to a scandal that emerges from their farming industry. It will not be a pretty picture in the slightest.

3) There is the risk of a laptop exploding in the cargo hold of the plane due to the laptop ban put in place by the Trump administration. Although the initial reports suggest terrorism, the laptop will be seen as the culprit in short time. This will see the policy reneged and a different way of screening laptops for bombs follows.

4) A closeted singer will be pressured to come out as gay by years end. Although his career will suffer initially, he’ll be better off for it long term.

5) There will be some economic and political troubles in France this summer. This recent attempted assassination of Macron proves my warnings about a coup aren’t so far off.

7/28 ETA: I have to get around to updating my predictions fulfilled page as a number of new fulfillments have occurred over the last few weeks. In the meantime, here’s another dream based prediction I had last night.

6) I had a dream of driving up to a theme park and a mass amount of people were evacuating the park. Some were crying over losing their friends while others were in total fear. Surprisingly, the cause of the problems was not terrorism but instead a sinkhole that swallowed people alive. I wasn’t able to gauge how many people perished, but the crowds looked intense and flights were not leaving immediately following this incident. I don’t want to reveal personal things that happened to me in the dream, but I’m torn between this happening in San Diego or somewhere in Australia. It might also happen in Florida, but I got a very west coast vibe based on which direction my flight would be heading home. I’m not sure when this should occur, but perhaps watch for it in August or September.

July 2017 is a very meticulous month yet unpredictable. Some individual embraces this month for they expect themselves to be clever and lives a modest life. In contrast, others may wished to drop this month as this is the 7th month of the year where they felt as floating and threatened by their marital relationships.

In the Philippines, the eastern and central visayas will pour huge amount of rainfall, typhoons from 1-3 maybe at stake. Landslide and overflowing of streets canal and water will likely to experienced.

London and the United Kingdom will have another terrorist attack so as in Pennsylvania and Cambridge.

People born first in their family during this month will received a surprise, a very charming luck awaits on his career and healthy living conditions.

Though its very critical to state that Manny Pacquiao fight against the hometown favorite and undefeated challenger Jeff Horn (16-0, 11KO), the Philippine Senator boxing fighter on his career will be defending his WBO welterweight title in a less silent promotion that banged the people in announcing the said event on the 2nd day of July 2017 Philippine Time.

As a paranormal psychic, i viewed this event as a facial injury, believing so, though Mr. Horn is not that big person in boxing arena, he will win over Manny Pacquiao over this fight in a very close rounds of muscle tone punching.

I regret to say Manny Pacquiao will lose his fight against Jeff Horn, the Australian will be the Champion….