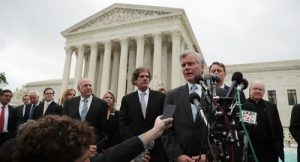 Today, the Supreme Court ruled that prosecutors can only indict people on bribery charges if “official action” is taken in exchange for a donation or campaign contribution. This came on the appeal of embattled Virginia governor Bob McDonnell who is now free to walk among us despite his very obvious crimes. This sad ruling, one made unanimously, showcases that:

1) Hillary Clinton isn’t going to be indicted, but that doesn’t mean she won’t be stopped from claiming the nomination. As I’ve said before, an actual indictment doesn’t have to come down to force her out of the picture. All that needs to be out there is proof that she did what would normally be considered a crime and that there are efforts by the President to shield her. That would help Bernie immensely; especially since I foresee health problems for Elizabeth Warren and Joe Biden in the near future.

2) The criminal indictment of Bill de Blasio and others may not happen, which means his assassination is more likely. Many of the people who I’ve predicted assassinations for either had attempts on their lives or stepped down due to political scandal. If those means of removal aren’t available, then those of a violent nature are inevitable. Considering how much scorn the mayor and others of his corrupt nature are under, they’d probably prefer the bullet anyway. At least they’d have a better legacy after having died from this way.

3) Finally, this is the beginning of what I have foreseen as US district attorney Preet Bharara’s downfall. This case has immediate implications for him as his case against Sheldon Silver is likely going to be thrown out on his appeal and the case against Dean Skelos could get weaker as a result. When the politicians he’s gone after accuse him of a witch hunt, coupled with anger from his overly broad “gang raid” in public housing units two months ago, he’s going to fall from his perch and will leave the public spotlight forever. He did a good job exposing the problems of the system, but flawed men are not immune from the power of karma.

Mostly, what this shows is that revolution is inevitable. The system won’t fix itself and the people are going to have to fix it themselves. That realization has finally hit across Europe. Hopefully, it will hit the people of the United States of America soon enough.