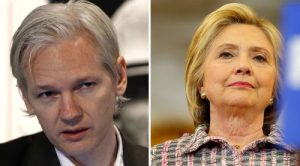 As I have previously forewarned, while Hillary Clinton is the presumptive Democratic nominee, the scandal over her emails threatens to derail her before she gets to the nominating committee in July. With this recent news of Wikileaks founder Julian Assange threatening to release evidence that would lead to her indictment in normal circumstances, the attempts by the White House and the Department of Justice to shield her from accountability will fail on account of the bravery of whistleblowers. I hope Assange does this in the next month and not after that. Waiting too long will blunt its effectiveness and make derailing her this way nearly impossible. If, however, the evidence hits the press in time, then her candidacy would be doomed and the revolution against imperialism and the corporate elite would begin at that time. Pray for his success. The moment of freedom for all Americans may finally be here.

12 thoughts on “Julian Assange May Take Down Hillary Clinton”