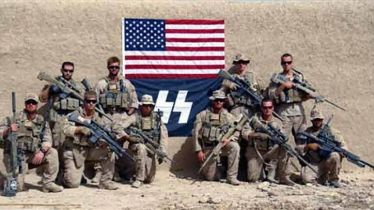 We have been taken over and hijacked by the NWO.  They are using our leaders and troops abroad and at home to spread their eugenics, Agenda 21, depopulation, death agenda.  This agenda becomes more obvious and bold every single day.  As the unjust orders increase the Oath Keepers and whistle blowers are needed to make the difference.  Our hope is you, banning together for human rights not committing crimes against humanity which defy the Oaths that you took.  The Oath Keepers are more obvious every day, as we see some few good leaders and troops standing up, speaking out, passing good laws, demanding justice, etc.  We are in a fight for humanity against a very evil cosmic force and your actions/good choices will make every difference for us.  I am not against the military or the government.  In fact, I’m supportive of the good people and Oath Keepers among the government/troops, who are the heart and soul of America.  I  am against unjust orders given by NWO foreign infiltrators pushing an anti-American, anti-human, anti-Constitutional agenda.  Patriots are not terrorists.  Oath Keepers are patriots.  I feel like we need to make Obama (and the media) flash cards to help identify a terrorist.  In one flash card it has a photo of ISL and on the back the correct identification is ‘terrorist.’  Then, we have an image from those ‘no hesitation’ targets of a pregnant American woman with a gun and on the back it says ‘not terrorist, patriot who believes in the second amendment.’