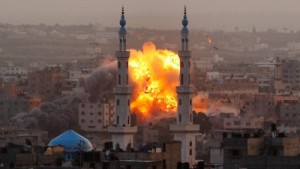 I’ve written about Israel on a number of occasions and need to make the following warning. As Netanyahu’s coalition is settling into power, the war mongering has already begun. The next target for Israeli aggression is Lebanon. The leadership has already warned that they would bomb civilians if it means taking out Hezbollah. That’s not going to fly with the international community at all and will backfire on them if they go through with their plans. The country is already on thin ice in regards to Palestine and Iran. If they go through with their plans to bomb in the late summer or early fall, then northern Israel will be nuked by years end. It will actually be Russia that arms a neighboring territory and they will unleash the deadly weapon around the ancient city of Canaan to the city of Haifa. It will be the end of Israel as a Jewish state and oppression follows for Jews in much of the world. Anti semitism is on the rise and it will not die down if things don’t change amongst the Zionist leadership in the nation. We all want peace, but that has to be an agreement on both sides of the aisle. Get your hawkish coalition in line or the entirety of the nation suffers the consequences of their choice for military action. In terms of neighborly aggression, the odds don’t play in your nation’s favor.