Two spirits told me that there was going to be a

and it will be caused be a massive landslide from Greenland.

Due to global warming Greenland ice is melting, the same thing that will stop the gulf stream conveyor and will cause the next ice age. The ice that is in the ground has started to thaw and this is what is holding the ground together and with this ice melting some of Greenlands land mass has and will become unstable. With it ultimately causing a mass land slide in to the sea.   originally had my doubt to how accurate this information was because when I looked at the map and it looked like that Greenland was to far away. But the truth of the mater is the maps of our world are not displayed accurately and Greenland is a lot closer to Canada than u would think I was originally hesitatent to whether to post this prediction because i was not shore if this was possible  But i have done my research and it is defiantly possible and i will show u my findings 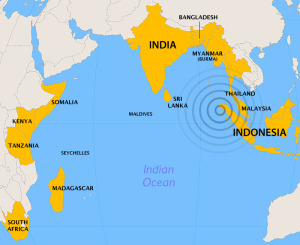 Here is a map of the epicenter of the 2004 tsunami

I checked on  a Google map distance calculator

u can find many more pictures on the internet if u want.

This is a lot closer than Shi Lanka was from the epicenter at 2004 so it is defiantly possible that a Greenland tsunami could reach there if the same size or larger. I think Canada may be some what uninhabited in that part ware I calculated the distance. But  the distance between Greenland’ and the most southern point of the Canadian east coast I calculated it  at 1350 miles, and if it is a real big tsunami which I think this one will be. I could easily see it going on for 450 miles further than the Shi Lanken tsunami did and a can see  it could be possible that a Greenland tsunami could reach there as well.

Two  spirits told me that this Tsunami will flood new York, which is a massive  1750 miles away from Greenland.

For it to do this  the water would have to go round a slight corner. I don’t know totally the science of  water or how it could make its way round but i think it may be possible. New York would be nearly 900 miles further than Shi Lanka was from the epicenter, almost double the distance! But lets say if this tsunami has two times the power and is two times bigger than  the 2004 one, Then it could be well possible. I think the section of the land that may slide of Greenland going into the sea will be massive. And with new York beeing low laying it wouldn’t even need to be all that big for it to affect New York As far as the rest of the east coast the further you do down the less it will be affected And i was told specifically by a spirit that by the time it gets down to Florida it will be just a wave. So u floridans should be OK.

In my meditations I keep seeing the statue of liberty and water swishing all around it I also see a bridge that looks like the Brooklyn bridge or the Manhattan one I don’t know if this relates some how. I think seeing the statue of liberty with swishing water around it and speaking to two spirits about this I think this prediction is highly likely. Whether it will reach as far as new York will will see. There is another psychic on this site Janice that posted about a east coast u.s.a tsunami. She said she thought it would be a asteroid I don’t know whether the event that she had seen is a different one to mine. Or that one of us may has some of the smaller details wrong which is easily  done doing predictions. Also this event I also think may happen at the end of 2014  or in 2015 which collates. It will come not that long after some other big events that will be due. Whether this is the same event or not some of the details seem to collate to what i have been told by two spirits years ago. And with my visions aswell which would make me suspect that’s these two events that we see may be the same event

so time will tell

If you have any comments please could you post them on my personal site tnx.

As this is easier for me to manage as I am very busy atm.

If you post your comments on this site I can’t guaranty a response.

If you want to though,  feel free to do so.

Click on this link bellow to get to my site tnx 🙂

I do know it is after some other big events that are not all that far away now.

a prophet psychic medium that can talk to dead people, View all posts by michaelvanders